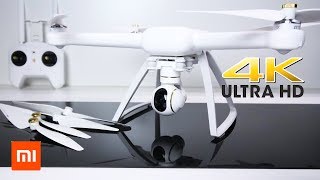 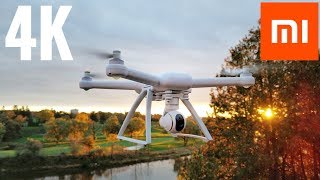 The manufacturer of consumer electronics Xiaomi has finally presented its drone. Its characteristics and its price have not been a surprise because the rumors had advanced the line. But the truth is that the company is called to turn around the market for drones that are halfway between the professional and consumer spheres.

My Drone has outstanding recording capabilities. Its 12.0MP camera can shoot in 4K resolution (3840 × 2160) at a speed of 30 frames per second, while if the capture of images occurs at 1080p the frequency can be increased up to 60 fps.

Among the features that are extracted from the official presentation (in Chinese) is the 5,100 mAh capacity battery, which allows a flight time of 27 minutes, in line with the best-known DJI drones, as the Phantom 4 counts with an autonomy of 28 minutes .

The price is the most important distinguishing mark of the Xiaomi Mi Drone. The company plans to market its product for 2,999 yuan, equivalent to 410 dollars, the version with 4K camera, and 2,499 yuan (340 dollars) a version with a 1080p camera. In China, the 1080p version of the device is already on sale and the other one is expected to arrive in July.

From Xiaomi’s device, which had already been baptized prematurely as Mi Drone, not many details are known. First it was thought that it would be more affordable than the rest of the offer of drones in the market, with a price that would be around 100 euros. If so, the Chinese brand would have opened the door of the mass public to the drones. It is speculated that Xiaomi would have allied with another company, which would be responsible for the manufacturing process, while Xiaomi would do it marketing and its sale.

The CEO of Chinese mobile phone manufacturer Xiaomi, Lei Jun, has already confirmed that the company will present a drone at the end of May. Previously it had been speculated that the presentation of the device could take place at the last Mobile World Congress in Barcelona in February, at its launch event of its smartphone Mi5. Finally it was not like that, but now it seems that it is his moment.

China is a whimsical market, but the middle class still pays for its expenses. DJI is a manufacturer of this country but its devices cost expensive. Hence, despite its success in the market has not reached that massive point. An IDC study estimated that camera drones will reach three million units by 2019 in China . They are respectable figures, but far from what could be considered massive in a country with more than 1.300 million inhabitants.

Xiaomi’s drone would play in another league: the low cost. Its predictable low price would have put it in the eye of many consumers who do not consider buying drones that cost several hundred or around 1,000 dollars. And China has enough volume to move production that has repercussions in other markets.

With this launching, a gap could be opened for a manufacturer with the ability to claim in the market to launch an economic drone and be able to attract the public. And although this is a difficult (and expensive) war to wage, it seems that Xiaomi finally dares to take the step.