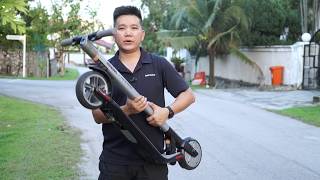 Short explanation: Xiaomi bought Ninebot, Ninebot bought Segway. So all three company names are somehow on the Ninebot ES2 electric scooter, which represents the successor to the Ninebot ES1. But is newer automatically better?

At first glance, Ninebot seems to continue to be convinced by the design of the Ninebot ES1. Because the second generation differs in terms of optics hardly from its predecessor. The biggest variation is the color combination. While the first generation mostly came in matt black, the ES2 uses a metallic gray tone. Mainly the handlebar is affected by this change, the running board is still painted in black. The red accents at the transition between front wheel and running board as well as the rear wheel find a place again.

As with its predecessor, you also install two differently sized tires. The front tire with a diameter of 8 inches is slightly larger than the rear wheel with 7.5 inches. Both tires have shock absorbers. A functional advantage with the Ninebot ES2 is the tread pattern with nubs, which should provide a better grip on the scooter. Especially with wet shoes that could be an advantage. Also, the Ninebot ES2 is foldable and thus ideally suited for transport in the trunk.

Who – like some CG-editor – Need for Speed: Underground 2 has played intensively, is probably happy about the under body lighting. You can even set this in the app. The LED offer different colors and modes. This would definitely be an eye-catcher on the streets. Of course, the e-scooter is also equipped with a usable 1.5W front and rear lights, which gives you a better view in the dark and ensures that you are seen.

The difference between the two generations is therefore less in design than in performance. The 300W engine brings the Ninebot ES2 electric scooter to a top speed of a whopping 25 kilometers per hour. That’s at least 5 km/h in direct comparison to its predecessor and with the same maximum range of 25 kilometers. The Ninebot can also handle gradients, but these should not exceed 10°.

Both provide a 5.2 Ah battery with 178 Wh for the power supply while driving. Charging once takes 3.5 hours. Of course, the range also depends on the rider’s weight (maximum 100 kg), as well as on the route and driving style. If you want to get a little more out of reach, use the app to limit its speed with the cruise control mode, for example . This is where the energy recovery system and Battery Management System (BMS) will also be deployed to monitor effective use.

If you want to extend the range greatly, that can be done with an external battery. As with its predecessor can be for almost $200 buy an additional battery that you can connect and thus brings the range to 45 km. It even seems to increase the maximum speed to 30 km/h. Since one theoretically with such an e-scooter participant of the road traffic, one must of course be able to quickly reduce his speed. At the maximum speed Ninebot indicates a braking distance of 4 meters.

Ninebot ES2 and the StVO

Like the Ninebot ES1, the Xiaomi M365 or even the FIIDO D1 or FIIDO D2 e-bike, the Ninebot ES2 is not allowed to drive on German roads. If you have a large private area, but you can easily ride on it with the e-scooter. We have hope for a new bill, which may create a new vehicle class for such electronic micro vehicles. At the time it would be, because after all, countries like France and the USA are not just one step ahead of us.

Xiaomi, Ninebot and Segway: three big names in the industry who stand for quality. Even the Ninebot ES2 knows how to convince in the overall package and is, to put it in a nutshell, the slightly faster, better and more expensive version of the Ninebot ES01. Which of the two you can buy now depends only on whether the faster speed, the design and the under-body lighting worth the almost 100€ extra. Alternatively, there can only compete in terms of pace and performance of the Xiaomi M365. And then you still have to know where you want to drive the scooter, after all, driving on German roads is not allowed.

Xiaomi launched 70mai A1 and A1 Pro low-cost electric scooter

Today, crowdfunding announced a two-wheeled vehicle manufactured by Xiaomi and 70Mai. For several hours the necessary amount of money was collected. Deliveries in China...

You Can Get 20PCS KF94 Triple Filter Face Mask For Just...