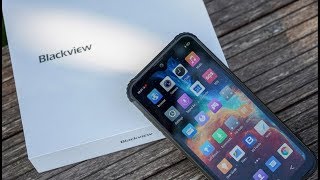 The Blackview BV9800 Pro looks a bit more interesting than BV9700 Pro, most notably the triple camera with a resolution of 48 MP, probably Sony IMX586. Unfortunately, we do not know what exactly is the use of three lenses. The front camera is 16 MP.

For example, the Blackview BV9800 Pro is to be fitted with a triple main camera, the first rugged smartphone to feature a rugged design. What is more, the camera will use a Sony IMX586 sensor with a resolution of 48 MP – the same sensor is known on the market for several interesting models from the already high class, for example from the just presented Xiaomi Mi 9, Honor View 20 or UMIDIGI S3 Pro.

The battery in BV9800 Pro has a capacity of 6580 mAh, there is also wireless charging. The smartphone is equipped with a 6.3-inch screen, Full HD+. Attention is drawn to the small, droplet note and relatively small frame. The rugged housing provides IP69K and MIL-STD-810G durability. The system is Android 9.0. In the video it is said that the processor is Helio P70, which is not a very interesting chip, and also 6 GB of RAM and 128 GB of internal memory. The basic version of BV9800 is expected to enter the market in May, and the BV9800 Pro version in August or September.

Such promising Blackview battleships is another step towards bringing closer the reinforced phones for the glass, irresistible flagships of the mainstream, which unfortunately clearly dominate over the best models of rugged type.