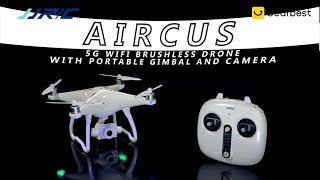 An alternative to the DJI Mavic Air could be the new JJRC X6. The JJRC has similar features to the DJI and costs less than half as much. Reason enough to take a closer look at the X6. It is attractive not only for its appearance, but also for its attractive price. If you dig deeper, the drone has a lot of other advantages.

Just like the DJI Mavic Air drone, the JJRC X6 has a 4K UHD camera that is stabilized with a 3-axis gimbal. The exact resolution is 920*1080 pixels with 30 frames per second (30 FPS). In part 3 of my video review you can also find 4K shots of the JJRC X6. These look very nice, but professional filmmakers won’t be enough. For private or semi-professional shots the X6 is a good alternative!

With the JJRC X6 you can fly up to 500m controlled. But in Germany you have to make sure that you always have visual contact to the drone. The visual contact with such a large drone is probably lost after about 400 meters, if not earlier. Therefore the range of 500m is completely sufficient for private use. Uncontrolled, the drone can even fly up to 1.5km.

The JJRC X6 has a large 3000mAh battery with which you can fly a maximum of 23 minutes. In practice, I actually got close to this value, even if the fail safe has already intervened at about 15%. But after that you can still fly near for some time. Since it is a 3-cell battery, speeds of up to 60km/h are possible. Whereby these are the data of JJRC. In practice I do not believe I came on this speed. Perhaps it is because the sport mode does not differ from the normal mode. You have a slider on the remote control. Maybe this will be released with a firmware?

Of course the JJRC X6 has a GPS + GLONASS with which some nice functions are possible. On the one hand you have the advantage that the drone can hold the position, even when a strong wind blows. The height of the X6 is also held by GPS, but also by a built-in height barometer.

The X6 also has the Follow-Me mode. Whereby it is called with these Copter Tracking or also Active Track. On the smartphone screen you can border an object or a person with a square. The AI of the camera then follows this actively or passively. Active means it even flies behind. And passive means that it only faces the object. To activate the active mode, you simply have to press GO on the screen after capturing the object.

I’ve been able to test a few of JJRC’s drones. Especially the JJRC X11 was clearly ahead of its time with its functions and price and we still bought it today. Qualitatively the JJRC X6 is really TOP as well as its competitor Hubsan H117S Zino! Everything works as it should. Here you get a high-quality copter at a moderate price. However, professional filmmakers will still use Copter in the 4-digit range. A big competitor from China could be the Xiaomi FIMI X8 SE. Those who want it a bit smaller and cheaper could make friends with the upcoming Xiaomi FIMI A3.