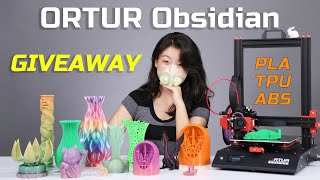 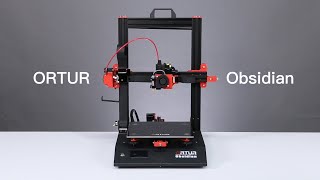 The Ortur Obsidian is a novelty on the market of 3D printers, if we already know the brand for its laser engravers, it is less present on this sector of activity. To stand out, Ortur has therefore decided to offer a rather complete product with nice features such as self-levelling, LED lighting, double Z-axis and many other things.

The Ortur Obsidian is a printer offering a rather classic printing volume. 25 cm wide as well as deep for 30 cm high. It is compatible with classic filament types such as PLA and ABS but also TPU for flexible designs as well as nylon and PETG. Its nozzle allows a high temperature rise with 260°C maximum announced. The heating plate climbs to 120°C. Enough to handle multiple materials. Its size is also quite usual with 50 cm width and depth and 53 cm height. A printer that can easily be placed in a workshop, therefore, even if it will be necessary to take into account the filament reel which is not included in these measures.

From a construction point of view, this Otur Obsidian is classic with two vertical axes that top a monobloc base. Its assembly is therefore easy with a few operations estimated to take 20 to 30 minutes of work and adjustments when it comes out of its box. Many technical elements have been designed to facilitate adjustments without having to disassemble all or part of the device. Simple systems allow, for example, to tension the belts easily.

This facilitated construction is also coupled with certain attentions to ensure the precision of the prints. There are two threaded rods for the Z-axis to stabilize the entire extruder as it moves.

This extruder has a double drive system and directly caps the printing nozzle. This proximity will avoid all problems of filament thrust between the extruder and the heating element. This is particularly useful with certain filaments, especially the most flexible ones.

Of course, the Ortur Obsidian has more classic refinements such as filament end detection to block your printing while you wait for your reel to be restocked. But the printer also offers interesting additions such as the presence of a LED lighting system that illuminates the nozzle during extrusion to clearly distinguish what your device is doing. Another strong point of the device is the presence of an automatic levelling system that will greatly facilitate this operation often considered the most difficult by users. The nozzle moves automatically and detects the position of the tray. You will only have to adjust it according to the Ortur Obsidian’s indications.

Other strong points, the discretion of the various cables and other connectors which are either invisible because they are hidden in its base, or integrated in the form of layers to avoid all the clutter of cables of certain printers. Finally, the motors that drive all the belts are controlled in a regular way, which has many effects on the whole. First of all, this avoids excessive and jerky movement noises which are often very disturbing, then it avoids “jostling” the printing which can cause quality problems, and finally it avoids disturbing your printer with micro jerks.

The control of the machine is done through a color touch screen from 3.2″. Once started via a small button on the front panel, we will see why it is there further, this screen is the control tower of the printer. The Ortur Obsidian also offers a USB input to be directly supported by an external device such as an Octoprint or a PC but you will be able to use it autonomously by loading a file to be printed via its MicroSD card reader. The display will allow you to make all temperature, adjustment, levelling and other adjustments without any problems.

The front button is important for several reasons. The machine has a switch to turn it off completely, but the presence of this small switch has other advantages. First of all, it is the possibility to avoid turning on, tensioning and powering on the whole machine directly from its power supply. But it is also and especially the possibility of seeing the printer completely cut off at the end of a printing. When the job is finished, the printer head goes into safety mode and after a defined cooling period, the machine cuts off the power supply to the fans. This prevents the machine from running unnecessarily after it has finished printing. As the printer is also able to resume printing in the event of a power failure, it will remain quietly waiting for your orders. It will not restart its fans unnecessarily when the power comes back, but when you turn it on again via this small button.

To manage all this, the brand didn’t break its head. It simply took over the Open Source work of the most talented developers. The 32-bit motherboard is an Ortur6 equipped with STM32 drivers driving the axes on 256 levels. The firmware is a custom-developed Marlin and the system is a FreeRTOS solution. The result is a simple, efficient, massively supported and constantly evolving system.