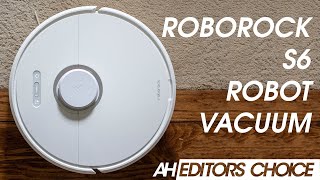 Officially, the Roborock S6 does not bear the name Xiaomi. After a first product under its true identity (Mijia Vacuum Robot 1S), the Chinese brand decided to give back its independence to Roborock, a Chinese company it finances, as a member of its “Mi Ecosystem”. However, the Roborock S6 has all the features of the first Xiaomi robot vacuum cleaner. The product is very similar to the Mi Vacuum Robot and the brand markets it in its own stores in a few countries. As for its configuration and use, they are done through the Mi Home application. It should be noted that the Roborock S6 is identical to the Roborock T6, the Chinese name for this model.

Since the Roborock S6 came to my house until I write these lines it has been about a month. From the first day until today, it has replaced my usual vacuum robot in my cleaning routine, being the adaptation to this model very fast and simple.

Before starting with the analysis of Roborock S6 as such, we will make a point about its relationship with Xiaomi: Roborock is part of the extensive network of Chinese startups in which Xiaomi invested at some point, specifically in 2014. However, Roborock is an independent firm of Xiaomi that commercializes its own models, although as they explain to us from home, they also produce vacuum robots such as ODM (original design manufacturer) for Xiaomi and it is Xiaomi that commercializes them through their sales channels. The Roborock S6 is integrated into the Mi Home app of the Xiaomi ecosystem.

From this model with intelligent laser navigation, the manufacturer highlights its precision when mapping and the improvement when plotting the cleaning route, so that the Roborock S6 can optimize its strategy to be more efficient. As a result, this adaptive route algorithm would theoretically calculate the best route based on room size and shape. In practice, we’ll see how efficient and intelligent your navigation is.

Roborock uses the previous model for noise as a reference, specifying that the S6 is 50% quieter than its predecessor, offering up to a maximum suction of 2000 Pascal and 58 dB of noise in its most ambitious cleaning mode, the maximum. We cannot quantitatively know the suction power of Roborock in its cleaning modes, but we can qualitatively analyze the result of aspiration.

In terms of appearance, the Roborock S6 has a classic cylinder-shaped design in these vacuum cleaner formats. In the front part it has a protector that protects it against possible hits with obstacles. In addition to the laser sensor, on the top there are 3 buttons for manual use: one to start localized cleaning, a second to start or finish cleaning and a third to start loading. In this area we also located a cover that allows access to the tank and an LED to verify its connection to the Wi-Fi network and the possibility of re-establishing it.

Although the most noteworthy sensor to obtain information from the environment is its laser distance sensor – located at the top of the robot – relies on its work of recognition by a height sensor, a wall sensor on the right that helps you perceive contact with objects and a sensor to establish communication with the base load.

If we turn the vacuum cleaner, we find 6 sensors of unevenness, next to the load plates and the onmidirectional wheel. These half a dozen sensors are in charge of analyzing with precision the movement of the robot using the ground as a reference to detect steps.

The Roborock S6 has a side brush with 5 plastic strips located on the left with the mission of attracting dirt to the suction area. In the lower central area we find the main brush, a roller with a spiral distribution of bristles and rubber easy to remove for cleaning. Inside the Roborock S6 box there are also several accessories for scrubbing the floor. Although the possibilities of aspiration are multiple and they are managed from the app, as we will deepen later, the process of scrubbing is quite manual.

Enough about the application, what is the value of Roborock’s latest robot vacuum cleaner? In most cases, it is simply excellent. Rather quiet even if it is better (we measured 64 db in balanced mode rather than the 58 announced), it starts its cleaning with the borders of your apartment before cleaning the central part completely, by scanning by line. Thanks to its central brush and side brush, no crumb can resist it. The Roborock S6 swallows everything in its path and does it very quickly. When you’re not used to it, it’s quite surprising.

We are also impressed by the dexterity of the Roborock S6. He avoids obstacles by stopping a few millimeters from the impact, he climbs small objects or he perfectly models a space. This robot vacuum cleaner has 14 sensors (instead of 13 on its predecessor), which allows it to detect the slightest detail. At the front, it has three buttons. The one in the middle initiates a complete cleaning, the one on the left only cleans a small space, while the one on the right forces the vacuum cleaner to return to its docking station.

In fact, this is one of the new features of the Roborock S6. Its docking station includes a cable reel so that nothing can be left lying around. It’s silly, but it allows him to be more discreet in your apartment.

Another point that we love with the Roborock S6, its mop kit. He is certainly not the first to do this, but it is extremely effective. A washable wipe is slipped into a special module that is filled with water (see below) and placed in the vacuum cleaner. Next time he launches, he’ll clean the floor. A waterproof base, to be hung on the charger, prevents it from flooding your apartment once cleaning is complete.

It should be noted that the mop kit requires human intervention and that it is therefore not possible to initiate a floor cleaning immediately after vacuuming without you being at home. This seems logical but it still forces the owner of the Roborock S6 to install it manually before cleaning begins.

Another promise of this new generation is a better autonomy thanks to its 5200 mAh battery. The brand announces 3 hours, we measured 2 hours by looping this model until exhaustion. For a robot vacuum cleaner, this is really excellent, especially since it recharges itself once the task is done. To wash a 20㎡ room, it takes a little less than a quarter of an hour with 95% remaining autonomy.

The Roborock S6 is also extremely easy to maintain. By turning it over, you can access the bin and open it in a few seconds. If a component needs to be replaced (such as the brush), it is also very simple. In the Mi Home application, images explain how to proceed.

Unfortunately, not everything is perfect. We regret the lack of compatibility with Google Assistant and Alexa, which are available on the Mi Vacuum Robot and Roborock S50, or Siri. We can imagine that it is only a question of updating before we can ask our voice speaker to “clean up the living room”. At the time of writing this test, the Roborock S6 is not compatible.

We also deplore the inability of the Roborock S6 to adapt to a change of environment during cleaning. If the door of a room is closed during the first pass and you open it during the journey, the vacuum cleaner will ignore it when it returns to that place. Under certain conditions, he is also a little too cautious. If a shoe is in his path, he can decide to completely bypass his area rather than push it. For the rest, the Roborock S6 suffers mainly from small bugs (which will probably be fixed), rather than major defects.

The Roborock S6 may not be the most efficient robot vacuum cleaner, but that doesn’t take anything away from its excellence. For $599.99, the company financed by Xiaomi offers an extremely complete, intelligent and perfectly integrated device to its Mi Home application. The Roborock S6 does a lot of things and does them very well. We can only recommend it if you want to automate your household tasks and enjoy a clean apartment every day.

MIMO C1 Cargo E-Scooter crowdfunding for around $1000 on indiegogo

Now you can buy the HOHEM Gimbal Stabilizer from TikTech

Do Not Miss TikTech Warm Winter Giveaway round 2 Starts in...