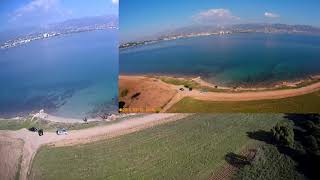 The SJRC F11 Pro quadcopter is designed to shoot video in almost any environment. Compact and relatively lightweight device is controlled by Wi-Fi, and its movement can be tracked through a smartphone synchronized with the remote control. Built-in GPS provides accurate determination of the position of the drone in space and automatic return to the base, and the camera shoots a decent video for this price category of quality.

In order to synchronize the SJRC F11 Pro with a smartphone, almost any modern model of mobile device can be used. The minimum requirements for installing a control application are iOS 8.0 or Android 4.4.4.

For the flight of the quadcopter it is equipped with 4 DYS collectorless engines. The design of electric motors manufactured in Japan includes high-efficiency silicon steel and high-temperature magnets. The use of NSK’s special bearings reduces motor vibration and noise levels. Each motor has a power output of 84.4 W and a seating diameter of 2 x 16 mm.

The use of collectorless engines increases traction with a relatively small increase in weight. Usually they are installed on special racing or professional drones to increase the speed of vehicles. Electric motors allow F11 Pro to accelerate up to 50-55 km/h.

Mode, which can become one of the main reasons to buy a quadcopter – following the object. In this mode, the device controls the coordinates of the remote control or smartphone and moves at a certain distance from it. Follow me” is suitable for capturing movies from a height. However, when using it, select an obstacle-free area for flying, including trees and high-voltage wires. The second mode allows the quadcopter to circle around the selected point. The user can adjust camera tilt angles, flight height, radius and direction. The function is usually only available for top models and provides panoramic shooting and quite spectacular movies.

Activating drone mode makes it easier to control. When the Headless mode is on, you can only move the device with the right sticks, regardless of which direction the quadcopter is turned. The headless mode is for beginners who have just bought the SJRC F11 Pro.

The flight plan can also be customized by the drone user. To do this, open the application on your smartphone and draw a route for the device. The function is almost the same as flying over the points with the specified GPS coordinates, but it allows you to do without the use of satellite navigation. Accuracy of quadcopter movement in the flight mode is not too high. But to perform such tasks as shooting selfies or entertainment video, its capabilities are enough.

The camera that received the SJRC F11 Pro RC drone has no optical stabilization. At the same time, the built-in GPS module allows the model to save its position in the air. And, although feedback from users shows that the quality of shooting is not the best, for such a price it turns out to be quite decent. We would compare this drone with MJX Bugs 5W. From 2 or 3 axis stabilizer manufacturer refused not to overload the processor, which would reduce the number of FPS. At the same time, the quadcopter suspension allows you to rotate the camera 90 degrees, changing the direction of shooting from a parallel horizon to the vertical.

The camera mounted on the unit captures 1920 x 1080 pixels (2K) of video at 25 frames per second. With F11 Pro, you can also get 2-megapixel photos. 90 degree rotation allows both horizontal and vertical shooting. Camera rotation can be controlled from the remote control, and photo and video can be controlled by gestures from the ground.

The standard camera can be replaced by a more productive device with a resolution of 2.7 MP, buying it in one of those online stores where the drone is sold. The camera recording format is 2592 x 1520 pixels, frequency – 25 FPS, standard recording formats for such equipment – MP4, AVI, JPG.

You can use the remote control included with the SJRC F11 Pro to control the Copter. You can connect a smartphone to the device. The SJ GPS Pro application is used to synchronize the phone and the remote control. Once connected, the first-person FPV view becomes available. Along with the picture, the flight information, including altitude and speed, is displayed on the screen.

Due to the fact that one of the main tasks of the device is to take pictures of selfi (photo and video), you can control its work with the help of gestures. The recording of the clip is turned on and off with the movements of the hands and photos are taken. The battery capacity of the control device is 300 mAh, the time of use – up to 10 hours, the battery takes about 50 minutes to charge.