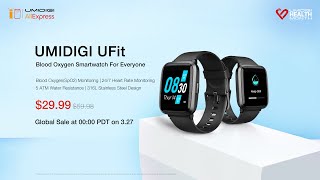 With pneumonia virus sweeping the globe, UMIDIGI has launched a new smart wearable device under the banner of protecting health: UMIDIGI UFit. The shape of it is reminiscent of the Apple Watch. Despite the rounded corners on the case, the display itself is angular, which is not noticeable at any time since there is not a single application that fills the entire screen. Nevertheless, the display edges should have been a bit smaller.

We currently know on their official website that this new device will be released on March 12th and is currently doing a Giveaway event with the smartphone UMIDIGI F2. Interested friends can try their luck.

The UMIDIGI UFit is equipped with a 1.3 inch touchscreen. The resolution of 240 x 240 pixels seemed sufficient to me in the test. The maximum brightness is solid, but not extremely good. There is unfortunately no automatic brightness control and unfortunately the watch always shines towards you despite the solid black background, since no OLED display is installed.

The watch’s operating system runs under the glass, which is relatively simple. Swiping in one of the four directions opens a different menu. This happens fluid at all times – more fluid than definitely with the Fossil Q. Starting all apps is also quick.

Even the applications that use content from the smartphone (control of the music, notifications) manage without stutters. The operating speed was pleasant at all times. In terms of usability, I have to contradict the test report of the identical AMAZFIT Bip Lite a little bit. Some functions are built up a bit “frivolous”, but on the whole I quickly found my way around. Rarely are there nested menus and with the button on the side you always go back one level. There is certainly still room for improvement – but I have seen far worse things with similarly expensive China watches. Incidentally, the display of the UMIDIGI UFit is activated automatically when the arm is raised.

With normal use, the battery of the Umidigi Ufit lasts for four to seven days – a little more may also be possible. However, the battery consumption strongly depends on which functions you actually use. In standby and without an active Bluetooth connection, the UFit seems to last forever – with occasional heart measurements and a switched on display only a few days. Nevertheless, the runtime is really good and far ahead of all smartwatches with Android Wear – but you also have to accept significantly fewer functions.

The UFit can best be described as “according to the price”. You can get a fitness watch that can be used for 60 USD, but the details can leave you with dissatisfaction and frustration – depending on what your requirements are. However, due to the good battery life and the solid fitness functions integrated into the app, we can at least partially recommend buying it. However, many better alternatives are only a few tens away.