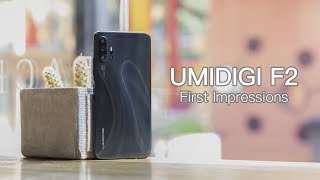 Launched by Google last Tuesday, Android 10 gradually starts to be adopted by smartphone manufacturers. In the case of UMIDIGI, the trend is that the F2 model is the first to have the latest version of the operating system of the search giant. Three images were leaked, this Thursday, with the indication that the future device will already be launched with the new edition of the platform pre-installed. You can check the posters below:

As you can see, the photos also show indications of features for the cameras of the future UMIDIGI F2. Among them are good captures in low-light environments, the presence of macro lenses, and cleaner and brighter selfies.

Umidigi will soon unveil its new flagship smartphone: the Umidigi F2. In addition, according to the manufacturer, this new model will be the first smartphone to be marketed with Android 10. Another novelty for the manufacturer, this F2 model has a panel with a perforated screen that integrates the Selfie camera. A more economical solution than using a contextual camera.

The “SHOT ON UMIDIGI F2 48MP AI QUAD CAMERA” on the screen also delivers that the smartphone will come equipped with a set of four rear sensors, whose main camera will have 48 MP. Already by the tip of selfies, it is possible that the front lens is the Samsung GD1 32 MP, which combines four pixels in one to generate more quality.

How do the four cameras of UMIDIGI F2 work? What are its characteristics?

The Umidigi F2 therefore includes a Full Bordeless screen with the particularity of having a perforation that integrates the Selfie camera. This technology is associated with an IPS LCD screen of which we do not know the diagonal. In addition, we can notice the very thin edges and a chin that is not very predominant.

Its predecessor, the Umidigi F1, was equipped with a Mediatek Helio P60 processor. So, probably, the F2 model would be equipped with the Mediatek Helio P70 processor. This new Helio P70 recently released, opts for an architecture derived from its big brother the Helio P90. Thus, it is adorned with an Octo-Core comprising: two Cortex-A75 cores and six Cortex-A55 cores for a maximum frequency of 2Ghz. As for the graphics part, it is dedicated to an ARM Mali-G52 ARM GPU. The Helio P70 supports photo sensors with a resolution of 48MP.

It is undeniable that Umidigi is unveiling more and more interesting smartphones. Thus, the Umidigi F2 will, I think, make a sensation and will support the new Umidigi X released in August. In addition, the native integration of Android 10 allows a nice publicity stunt for the manufacturer. However, we hope that this one is a little more serious about following up on its OS updates. See you at the end of September for its launch!