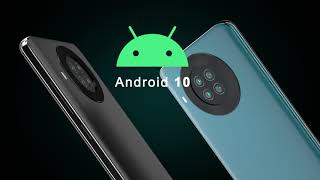 Almost a year ago I published a review of Cubot X20 Pro, which offered good specifications and quality for little money. A year has passed, and the market appeared his successor, Cubot Note 20 that can no longer so approachable price, but its design and specifications correspond to more current consumer expectations.

The phone has dimensions of 162.8 x 75.4 x 8.8 mm, so it has practically the same size as Redmi Note 9, but it weighs as much as 200 grams, and is as much as 40 grams heavier than it. The difference in weight between these two models is really big and believe me that you feel the weight in your hand. The front of the phone is dominated by a large 6.5-inch display with a notch in the shape of a water drop. The frames around the screen are narrow except for the bottom one, which is slightly thicker than the others.

In terms of design, the Note 20 is by far the most beautiful Cubot phone I have tested so far. A huge merit in this is the rear panel covered with glass that simply looks beautiful. It is slightly rounded, and its surface, thanks to the varnish underneath the glass, can successfully replace a mirror. The panel is very minimalistic, it only has a square camera module placed on the side and the manufacturer’s logo, but it has a very poor oleophobic coating, because it is extremely dirty and collects fingerprints. The camera module itself, however, strongly resembles that of the Redmi K30 Pro and definitely protrudes above the body of the device, which makes it easier to scratch, but does not sway on a flat surface as it was the case with POCO F2 Pro.

The phone is equipped with a Quad-core SoC from MediaTek, namely Helio A22 (MT6761) whose cores work at a maximum frequency of 2GHz, and graphics generation is responsible for the PowerVR GE8300 graphics system. Helio A22 made in a 14nm technological process is one of the most energy-efficient processors in the medium segment and can successfully compete with chips such as Snapdragon 435. The memory controller in the Helio A22 is able to handle up to 4GB of RAM, while in Note 20 we have its 3GB. So this is not the maximum that could be pressed here, but it is still really a lot. The vast majority of phones in this price range have 4GB of memory.

When it comes to cameras, Cubot once again reached for proven solutions, it’s a pity that they are not newer. The triple camera module consists of the main camera SONY IMX486 with a resolution of 12 MP that we could previously meet in Cubot Quest and Max 2, we also have a wide-angle 8 MP camera with 125° field of view, and a sensor for recording Sony IMX350 depth with 20MP. The last two lenses are identical to the recently tested Cubot P30. In the front, there is a selfie camera with a 13 MP.

The new CUBOT Note 20 smartphone has a built-in 4200 mAh battery that supports 5V/2A quick charging, but does not support wireless charging. Playing video for over 11 hours on YouTube in full screen mode, with brightness and volume set to 50%, the battery went down from 100 to 12%. With normal use, the phone should go without charging calmly for 2 days. Charging itself does not take too long, from 0 to 100% it takes just over 2 hours.