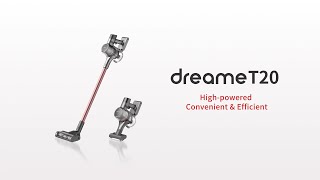 Hoovers from China are a dime a dozen. However, many models are reserved for the import trade. The anchor eufy HomeVac S11 Infinity, which Felix has also tested extensively, was recently released in Germany. The Dreame T20 takes a very similar line, but wants to score with slightly different advantages. For example, the manufacturer increases the suction power and also states a significantly higher running time.

But perhaps you are wondering first of all: “Dreame? What kind of manufacturer is this again?” Well, Dreame is closely associated with Xiaomi and is on the move in the company’s ecosystem. He is said to have already manufactured equipment for Xiaomi. That’s why many retailers lump the companies together, even though Dreame is an independent company in itself.

Is there a little bit of Xiaomi-DNS in Dreame T20? That’s what I’m trying to find out in the test – in other words, whether this cordless and bagless hoover is any good in practice.

The design of the Dreame T20 is less reminiscent of the Dreame V11, but rather of many other Chinese hoovers such as various models from Jimmy or some models from the Rodmi range. In direct comparison with the previous model, the V10, the design now looks much more elegant in the more stylish silver grey.

However, I am still bothered by the fact that the dust container cannot be removed closed. This is very practical for emptying the anchor model mentioned above. Instead it is opened downwards on the Dreame T20 and the dirt just falls out. Nevertheless, the unit for the container can be taken apart and thus cleaned individually. To do this, the filters and co. must be pulled out upwards.

The battery is also permanently installed, which is neither environmentally friendly nor practical. The charging connection is also not located on the battery, but on the back of the suction unit. This is also where you will find a small, coloured OLED screen. The display provides information about the selected suction mode, the remaining battery life or maintenance instructions – for example, if the container should be emptied.

Whether a display is necessary for a hoover? I’d rather see the money invested in other components, but of course it’s certainly practical. By the way, don’t be fooled by the look of the Dreame T20 in the photos or the marketing material: The housing looks like metal in some pictures, but it is a normal high gloss plastic. But the workmanship fits.

In addition to the hoover itself, the following are included: 2-in-1 brush, electric mite removal brush, flat 2-in-1 brush, roller with soft roll, charging dock, extension tube and also an extension hose. The charging dock is a bit rickety and only useful if you want to mount the Dreame T20 on the wall.

Dreame is capable of learning: If on previous models (or the already mentioned eufy HomeVac S11) you always had to keep the power button pressed during the vacuuming process, the T20 has a locking mechanism. This means that the hoover remains active until you remove the lock. If you prefer to keep the trigger pressed, this option is also available – so both sides are happy. The suction power can be adjusted using a button under the OLED screen, which incidentally has no touchscreen function.

Dreame markets the T20 with its Space 4.0 high speed engine. According to the data sheet, it achieves an output of 150 AW or 25,000 pa. With 125.000 RPM the engine should work, which all sounds quite impressive. This also leaves the eufy HomeVac S11 with 120 AW and 22,000 pa behind. But numbers on paper are one thing – suction power in practice is another. I compare this with the Jimmy JV51 (115 AW), which I used for a long time. But I have also seen the eufy HomeVac S11 in action.

Does the Dreame T20 vacuum better? Do you notice a higher suction power in everyday life? Well, it may be that the Dreame T20 picks up the odd crumb from the floor more quickly, especially in turbo mode. Especially since you are well equipped with the different attachments for sofa, cobwebs on the ceiling or laminate and wooden flooring. As with other handheld hoovers, the Dreame T20 is not so much predestined for carpets, especially long pile. Anyone who vacuums carpets will definitely have to switch to the highest level, but still achieve good results.

I used the Dreame T20 to clean the table from crumbs after breakfast, of course by wiping it with a damp cloth and you could already see that less passes are necessary than with weaker models like my old Jimmy. I would have liked it if you could replace the soft fabric roller, which after all is also suitable for larger furniture surfaces, with a rotary brush – like the eufy HomeVac S11 Infinity. Hair would like to wrap itself around it, but for hard floors such a brush is more suitable.

Funnily enough, the Dreame T20 competes directly with the Dyson V11, not only in its specifications but also in its name, although the Dyson V11 reaches 185 AW. The eufy HomeVac S11 is of course closer in terms of price. I find it difficult to decide which vacuum cleaner I would rather recommend: The eufy HomeVac S11 Infinity costs over 60 euros less than the Dreame T20, but still comes with a second battery, a more practical dust container and LED lighting on the roller. It provides the stronger suction power and an OLED display.

I think it depends a bit on the area of application: In my opinion the Dreame T20 can achieve better results with carpets and is also more suitable for owners of pets or the associated animal hair due to its higher performance. The eufy HomeVac S11 Infinity is otherwise the winner for me personally because of the second battery and the better design.

On the other hand, the 90 minutes of battery life is based on the weakest suction mode, so Dreame is quite clever at this. In the middle mode, you can expect about 70 minutes and if you go full throttle, well, this Hoschi will last about 10 minutes. It’s not grenade-strong, but it’s definitely above average.

The Dreame T20 is a bag- and cordless handheld vacuum cleaner, which is well manufactured and has only minor weaknesses in its features. For example, I would have preferred a replaceable battery and a completely removable dust container. On the other hand, it’s great that you don’t have to constantly press the power button during operation because you can activate an optional lock. The OLED screen, on the other hand, looks nice of course, but instead I would have preferred a second, replaceable brush roller for the large roller.

A small note at the end: The T20 is launching a crowdfunding campaign on indiegogo for just $219.99, but you should consider if this is worth it, because then you will of course waive the warranty.