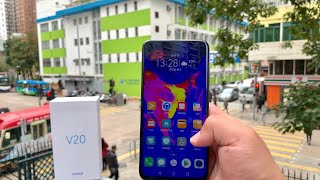 After the release is before the release: Huawei subsidiary Honor is famous notorious for the staggered presentations of his smartphones. Now Honor V20, which in Germany will bear the name Honor View 20, has also completed this procedure. The Chinese manufacturer has officially introduced the mobile phone in China – including the prices and technical data.

At the beginning of December there was a first presentation of the Honor V20 at an event in Hong Kong. However, only selected hardware facts and the appearance of the smartphone were presented to the public there. Now the Huawei subsidiary has officially announced the mobile phone with all technical data and prices. Typical for Honor: A very similar version of the model will also be released in Europe. In Germany, the device is called Honor View 20 and will be presented again on 22 January 2019.

In China, the Honor V20 will be equipped with a 6.4 inch LCD display. The resolution is 1,080 x 2,310 pixels (Full HD+). Thanks to the “display hole” there is no notch and the panel covers almost the entire front. Only a small edge on the underside remains. Inside the Honor V20 is equipped with the Kirin 980 as well as 6 or 8 GB RAM and 128 or 256 GB internal memory. The battery should have a capacity of almost 4,000 mAh and be quickly rechargeable with 22.5 watts.

It was already known that Honor relied on the camera sensor IMX586 from Sony, which again supports many AI functions. The sensor has a resolution of up to 48 megapixels. In addition, there is an f/1.8 aperture. For the first time Honor also uses a 3D camera (TOF) on the back. On the front, the Selfie camera with f/2.0 aperture is embedded in the upper left corner of the display. It shoots photos with a maximum resolution of 25 megapixels. Further features of the Honor V20: Android 9 Pie and EMUI 9 are pre-installed. It has a dual SIM function, uses all current connection standards such as Bluetooth 5.0 and USB Type C and there is a classic fingerprint sensor on the back. A 3.5 mm input is also on board.

The Honor V20 will be sold in China from 28 December. The price depending upon memory equipment reaches from converted 380 euro for 6 GB/128 GB, over 445 euro for 8 GB/128 GB up to 510 euro for the largest variant with 8 GB main memory and 256 GB internal memory. The smartphone is available in three colour versions: Blue, red and black. All versions come with an optical highlight: a V-shaped texture on the back that changes colour depending on the viewing angle.