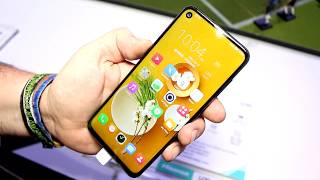 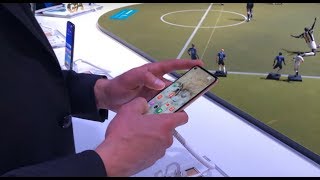 Hisense U30 Smartphone with Hole-Punch Screen

Hisense is probably best known in Germany as one of the world’s largest manufacturers of televisions. Although they already have a few smartphones on the market, they want to attack this market again from the third quarter of 2019. The flagship will be the Hisense U30, which we were able to admire at the Mobile World Congress 2019. Even Xiaomi has to be careful.

The Hisense U30 is a smartphone for the eye, that’s why we noticed it first at the booth. After all, the manufacturer relies on an imitation leather back, which is available in either black or blue. We haven’t seen that often lately, but we also liked the MAZE Comet pretty much. It has the dual camera including flash and fingerprint sensor, which are arranged relatively centrally.

But also the front is an eye-catcher. First there is the 6.3 inch Full HD+ display. Since Hisense certainly has expertise in displays, you install a good panel here, which definitely scored in our first impression. Of course, the front camera is conspicuous on the display, which comes into its own in the upper left corner of the hole punch screen.

Despite the size it was relatively good in the hand, the dimensions were 156.46 x 73.64 x 9.27 mm. This makes it a good millimeter thicker than Honor’s competitors.

Also inside it remains exciting. The Hisense U30 is equipped with the Snapdragon 675, which of course comes from Qualcomm. This still relatively new processor clocks with a frequency of 2 GHz and is energy-efficient thanks to the 11 nm manufacturing process. Of course Hisense has to put up with the comparison to the honorarium, which one loses despite the good processor overall, as the Kirin 980 plays on a completely different level once again. But at least there is a proud 8 GB RAM and 128 GB memory.

In the recess in the display there is actually a 20.0MP camera, which is supposed to provide good selfies and also our first test selfie from the MWC booth looked very good. This also applies to the dual camera on the back, which is equipped with a 48 megapixel sensor supported by a 5 MP sensor. Whether it’s the Sony IMX586 from the Xiaomi Mi 9 or UMIDIGI S3 Pro or the Samsung ISOCELL sensor from the Redmi Note 7, we couldn’t answer on site.

Back to the phone’s thickness. This can be explained with a glance at the data sheet. Finally, Hisense uses a battery with a capacity of 4,500 mAh! This should provide a good two days battery life, depending on how well the pre-installed Android 9.0 is optimized. When the battery bar is nearing its end, the phone can be quickly recharged with Quick Charge 4. Qi charging is not available, but NFC and of course Bluetooth, Dual Band WiFi and GPS.

The Hisense U30 was probably one of the biggest surprises at MWC 2019 and we really liked its first impression. This is mainly due to the design, but also to the camera and the technical data. Above average performance, large battery, enough memory and even NFC. Of course, we tried to get as much out of it as possible, but we still couldn’t get a price. And they also didn’t want to promise us one hundred percent whether the Hisense U30 would be destined for Europe. If that is the case, however, we will have strong competition for the established manufacturers.