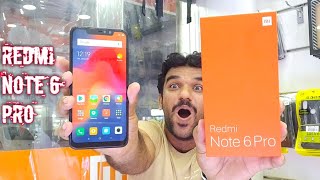 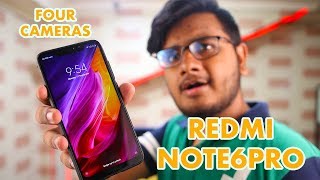 The display with 6.26 inches in diagonal is larger than that of its predecessor. Apparently, but now only on an HD resolution, which is probably 1280 x 720P. The aspect ratio is 19:9. Despite the larger display, the case size is likely to be even lower than the Redmi Note 5, as you save some space by the Notch. For example, This is also the case with Xiaomi’s Pocophone F1.

The back is already very familiar to Redmi Note 5 owners, because nothing changes here. Vertical dual camera, fingerprint sensor and no aluminum body.

Inside, there is the much bigger surprise. Here is the Snapdragon 660 used, which has already convinced us in several MIUI smartphones such as the Xiaomi Mi Note 3 or Mi 6X! The eight-core processor with Kryo 260 cores is not the newest mid-range processor from Qualcomm, but still powerful. As you know it from Xiaomi, you have almost free hand in the storage choice. 4 GB and 6 GB of RAM can be combined with 32 GB, 64 GB and 128 GB of memory.

The just mentioned dual camera on the back probably still consists of the same 12.0MP and 5.0MP combination, which ensures very solid photos. On the front side, however, this time a 20 megapixel sensor is used, which should probably be the same sensor as in the Xiaomi Mi A2. For this one still reaches a 2.0MP sensor, which is likely to gather at least for selfie portraits a few additional image information.

Also in the battery Xiaomi remains true to himself. Also in the Xiaomi Redmi Note 6 (Pro) you put back on a 4,000 mAh strong battery, which should also catapult this note device to a duration of over 10 hours. You can quickly recharge the battery quickly with Quick Charge. Whether this time finally a USB type-C connector installed or remains with Micro-USB, is not yet known. Likewise, we do not know yet which versions of wireless connectivity are implemented. But we think that Xiaomi covers everything important here.

Interestingly, the Xiaomi Redmi Note 6 is likely to ship with MIUI 10 immediately, making it one of the first official MIUI 10 devices.

When exactly the note 6 (Pro) appears is unclear, but since the Specs are already almost completely known, we expect a release of the end of the year. In addition, I think that the name addition “Pro” is again only for the Indian market, as it was already the case with the Redmi Note 5.

Honestly, the Redmi Note 6, set the case so it comes on the market, not the really big upgrade. It upgrades the smartphone with the Notch, allows a little more display area with the same or even smaller case size and relies on a slightly stronger processor. In fact, this is not a huge leap from the already very good Snapdragon 636 processor. It combines the design of the Redmi 6 Pro with the hardware of the A2 and relies on the strengths of the Redmi Note 5 in the form of battery, camera and connectivity.

Are the changes enough? Would you upgrade from the Redmi Note 5 or wait for the Redmi Note 7? With Xiaomi’s release rhythm this is probably already in the summer of 2019.